The two panels above are from Coso, and show the typical naturalistic style of sheep represented at the site.  However, in the left picture, note the older stylized sheep neck and horns glyph which had a full-bodied sheep drawn over it in the southwestern corner of the panel. The first image was downloaded on October 26, 2013 from bradshawfoundation.com. The second image was downloaded from oregonrockart.com on October 26, 2013. 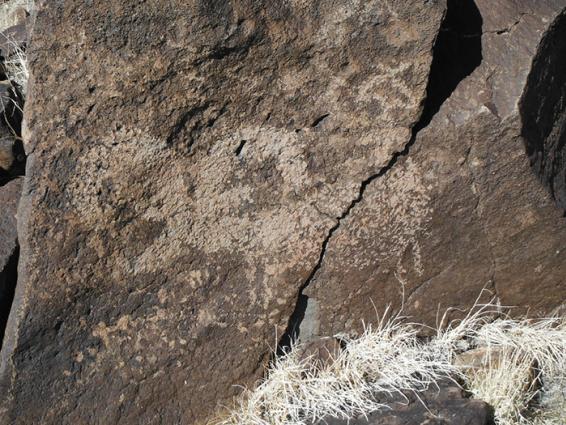 Sylized sheep neck and horns from Tunna Nosi, another site in western NV. Note the similarity of this glyph with those from the northeastern NV site.

In western and northern Nevada rock art sites, mountain sheep are typically depicted as highly stylized horns, rather than the more naturalistic, full-bodied images more common in southern Nevada and the Mojave Desert region. Examples of stylized sheep horns (as well as bodies) from west-central and northeastern Nevada are shown below.

A "full-bodied" stylized sheep from the Huntoon area, western NV. Note the stylized neck and horns only, similar to the northeastern NV site (above), but here the horns are depicted like "rainbows".

What is the relationship, if any, of the location of antelope, deer, and mountain sheep traps to rock art sites in the Great Basin? The answer to this question has a relatively deep and debated history in Great Basin research. My studies of large-scale traps in the Great Basin suggest that these features are often directly associated with some of the largest and most spectacular rock art sites known in western and eastern Nevada. Interpreting what this correlation might mean, however, is complex.

The 1950's and 1960's saw the development of what would become known as the "Hunting Magic" hypothesis to interpret the meaning of western Great Basin rock art. Robert Heizer and Martin Baumhoff's "Prehistoric Rock Art of Nevada and Eastern California", published in 1962 (University of California Press, Berkeley), noted a correlation between rock art sites and the location of artiodactyl game trails or migration corridors. To Heizer and Baumhoff, this suggested that perhaps rock art imagery was made in order to assist in 'charming' big game to ensure a successful hunt. Seven years later, Campbell Grant, James Baird, and J. Kenneth Pringle applied this concept to the spectacular rock art of the Coso Range located in the Mojave Desert of the southwestern Great Basin, in their 1969 publication "Rock Drawings of the Coso Range" (Maturango Museum Publication No. 4, Ridgecrest, California). Here, Campbell, Baird, and Pringle argued that the Coso rock art imagery was not only designed to ensure successful mountain sheep hunting, but that it was representative of an ancient 'Mountain Sheep Religious Cult'. In both of these cases, none of the researchers noted the presence of large-scale traps per se. Heizer and Baumhoff relied on the correlation of rock art and game trails; Campbell, Baird, and Pringle noted that much of the Coso rock art imagery was located along narrow canyon walls which would have served as prime places to ambush migrating mountain sheep.

Shortly thereafter, beginning in the early 1970's, Karen Nissen began taking a closer look at the relationship between game trails and the spectacular rock art site known as Black Point located along the East Walker River in western Nevada. Her research culminated in her Doctoral Dissertation completed at the University of California, Berkeley in 1982. Titled "Images from the Past: An Analysis of Six Western Great Basin Petroglyph Sites", Nissen focused on the presence of game trails, rock alignments, and imagery of both mountain sheep and apparently drive lines and traps themselves at the Black Point rock art site to support the Hunting Magic hypothesis. In addition, Nissen noted that other large rock art sites such as Grimes Point located near Fallon, Nevada (1) did not show the same kind of imagery of mountain sheep and trapping lines; (2) was not located along known game trails; and (3) did not contain nearby rock alignments, suggesting that sites such as Black Point served as places to help ensure successful large game hunts while other sites such as Grimes Point likely served other purposes. Importantly, because large game trapping usually involved many families, sites such as Black Point also showed evidence for ancient communal activities in the Great Basin.

In the 1990's, David Whitley attempted to turn the Hunting Magic hypothesis on its head.  Whitley, through the study of primarily a single Great Basin rock art site - Coso - argued that Great Basin rock art was (1) not made in order to ensure successful big game hunts; (2) was exclusively made by individual shamans; and (3) reflected the after-the-fact mental imagery of shamans who went through trance states invoked by either hallucogenetic plants, self-starvation, or both. These ideas were put forth in a series of publications, including 1992's "Shamanism and Rock Art in Far Western North America" (Cambridge Archaeological Journal 2:89-113) and 1998's "Coso Rock Art: A New Perspective" (edited by Elva Younkin, Maturango Museum Publication No. 12, Ridgecrest, California).  Among other arguments, Whitley suggests that the thousands of mountain sheep images at Coso represent the kinds of images of these animals that would be expected to be mentally imagined if a person was in a trance state. Further, based on ethnographic accounts, 'mountain sheep shamans', or shamans who invoked mountain sheep as their spirit helpers, were associated with 'rain-making shamans', so the images at Coso were made by individual rain shamans to ensure adequate rainfall, not adequate mountain sheep kills during communal hunts.

More recently, the late Alanah Woody, Angus Quinlan, Mary Ricks, and Bill Cannon, among others, have taken issue with both the 'Hunting Magic' and 'Shamanism' hypotheses. These authors point out that many rock art sites in the Great Basin are directly associated with house rings and other domestic artifacts such as grinding stones suggesting the presence of women. In addition, many of these sites are not along large game migration corridors, and rock alignments are not present. They suggest, in fact, that contra to most previous assumptions, women may have been active participants and makers of Great Basin rock art (see, for example, 2007, "Great Basin Rock Art: Archaeological Perspectives", edited by Angus R. Quinlan, University of Nevada Press, Reno).

In addition, however, vulva motifs are known to be particularly prevalent at several rock art sites; these sites may have served as "coming of age" ceremonial places for young members entering adulthood.

Today, then, the interpretation of Great Basin rock art can be generally placed in 3 or 4 different schools of thought, which may be referred to as (1) Hunting Magic; (2) Shamanism; and (3) Domestic, as well as (4) Coming of Age.

Alan Garfinkel has recently argued in support of the original Coso Sheep Cult interpretation (2006, "Paradigm Shifts, Rock Art Studies, and the "Coso Sheep Cult" of Eastern California", North American Archaeologist 27:203-244) for the Coso rock art site (Mojave Desert, southwestern Great Basin) specifically. Whitley has attempted to expand his Shamanism interpretation beyond the boundaries of Coso itself by suggesting that his model applies to the "western Great Basin", even though his model originated from a reinterpretation of the meaning of the Coso glyphs only. Mountain sheep glyphs from most western Great Basin rock art sites (as well as those from central and eastern Nevada), however, don't look like those from Coso and other sites in the southern Great Basin. Southern Great Basin rock art sites typically display more naturalistic, full-bodied sheep, although stylized versions of sheep that depict only the neck and horns can be found at sites such as Coso in Little Petroglyph Canyon. In contrast, central, eastern, and western Nevada rock art sites typically display stylized sheep neck and horns, with full-bodied sheep less common. 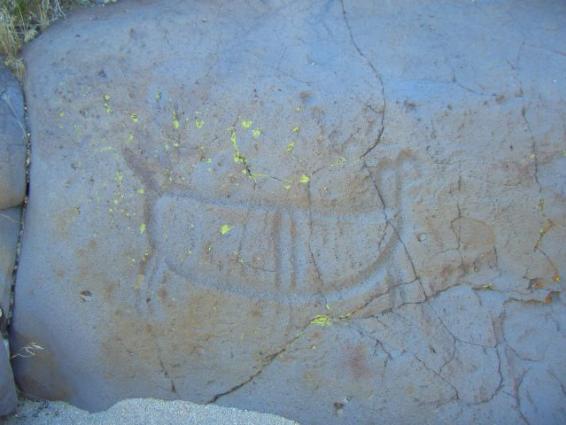 This image is also from Coso, from Little Petroglyph Canyon. Note the neck and horns on this glyph. Many rock art sites from central and western Nevada contain images of only the neck and horns, representing a highly "stylized" sheep. This image was downloaded from oregonrockart.com on October 26, 2013.

A full-bodied sheep from Black Point. Note, however, the gross exaggeration of the size of the horns. 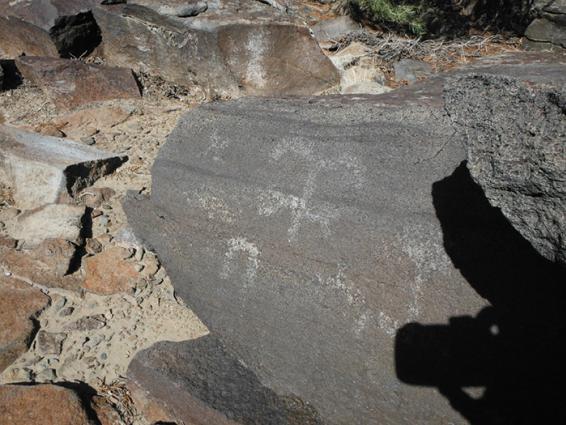 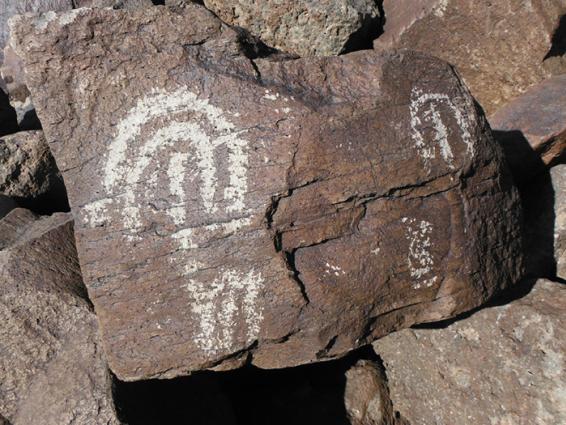 The three images above show three versions of stylized sheep necks and associated horns from the Pilot Range, northeastern NV.

Three sheep "drifting" along a large-scale drive line, western NV. This rock art site, known as Black Point, is located in the heart of the large-scale trapping zone in west-central NV. 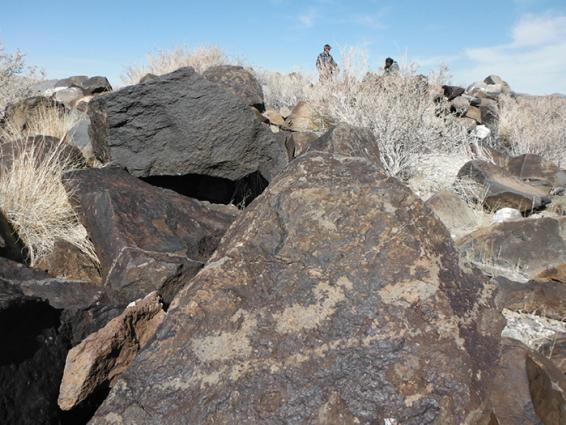 As mentioned above, all of the previous interpretations of Great Basin rock art have been made without the knowledge of the large number of large-scale traps that we now know exist in the Great Basin. My studies suggest that, as originally proposed in the 1960's, many of the largest, most spectacular rock art sites known in the northern one-half of Nevada are associated with game trails and large-scale traps. This does not necessarily mean, however, that all rock art sites were made for "Hunting Magic" purposes, or necessarily that the "Hunting Magic" hypothesis as originally proposed fits for all of the images found at these sites. I think the situation is far more complex than that; as well, there is no doubt that most rock art sites are associated with domestic structures and artifacts without the presence of large-scale traps. The interpretation of Great Basin rock art may well require the incorporation of all 3 of the current general schools of thought, (hunting; shamans' trance states; domestic activities), as well as communal coming of age ceremonies.

The two images above, depicting stylized sheep neck and horns, are from Celebration Park, Idaho, along the Snake River. Downloaded from oregonrockart.com on October 26, 2013.