Antelope traps are generally found in valley floors or adjacent slopes and ridges where the animals were driven into corrals. The primary construction technique employed for construction of the corral seemed to be juniper limbs perched at low angles and cross-hatched with one another. Sagebrush may have been used as filler amongst the tree limbs in order to create a more solid structure. This created a solid albeit relatively low (about one meter in height) fence. In western Nevada, the base of the juniper limbs were often anchored by piling a series of generally 4-6 rocks around each limb base. For archaeologists, this created a more visible and long-lasting structure - in other words, antelope corrals that were constructed entirely of juniper and sagebrush may have left no other visible signature of their existance once the wood rotted away unless the hunters killed the trapped animals with projectile points, thereby leaving behind concentrations of catastrophically broken points. Antelope corrals that were constructed with the use of rock anchors are more visible today - the more ancient antelope corrals may consist entirely of the rock anchors only if (1) all of the wood has rotted away or burned; and (2) projectile points were not used to kill the trapped animals. Sometimes, rock anchors, wood, and broken points are all found together. Sometimes only the rock anchors remain.

In contrast, deer and mountain sheep fences and corrals are distinguished from antelope corrals based on location on the landscape and construction techniques. Antelope are generally not jumpers, so relatively low fences fit the bill. Deer, in contrast, are jumpers. Below are two images of the Wichman Corral (western Nevada) that we interpret as a deer trap. Juniper and pinyon tree limbs solidified by rock anchors are all present in this well-preserved corral. The standing tree limbs often reach two meters or more in height, and the corral is situated along a current deer migration route. This corral is very similar to the DC deer corral constructed in northeastern Nevada.

Figure 3. All that remains of the Blind Point #1 trap is a series of rocks stacked atop larger rocks, as seen in this image. Here only one rock (two examples seen here) still sits atop the larger rocks embedded in the sediment. The other rocks that were used as anchors are lying below the rocks still sitting atop the larger rocks (see Figure 4 below). 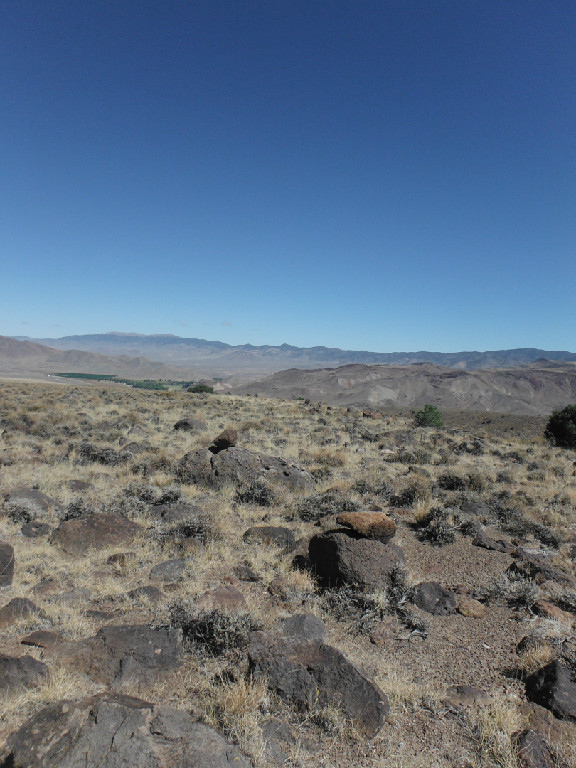 Figure 2. A close-up of one of the upright limbs used in the construction of the Wichman deer corral.

Figure 1. A portion of the Wichman deer corral. Note the upright limbs anchored by rocks. 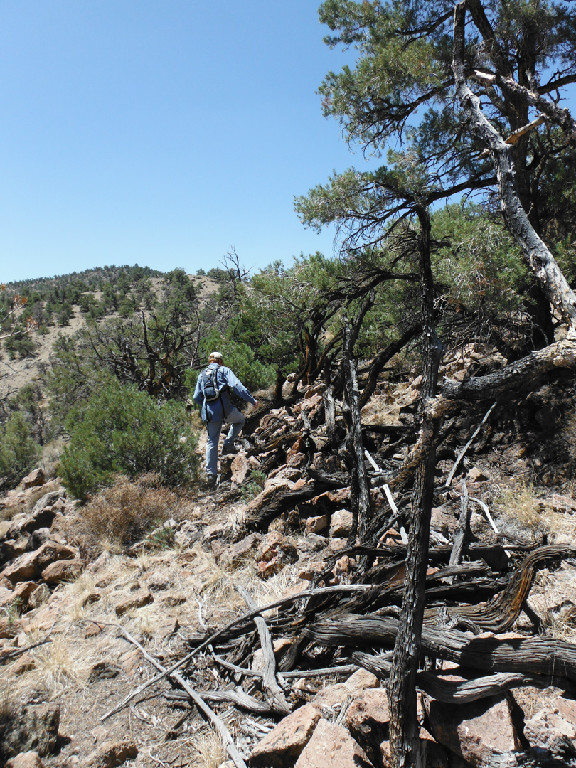 Figure 4. A close-up of a collapsed rock anchor at Blind Point #1. Here we see two rocks remaining atop the larger rock, as well as the other 3-4 rocks that fell and lie below them. 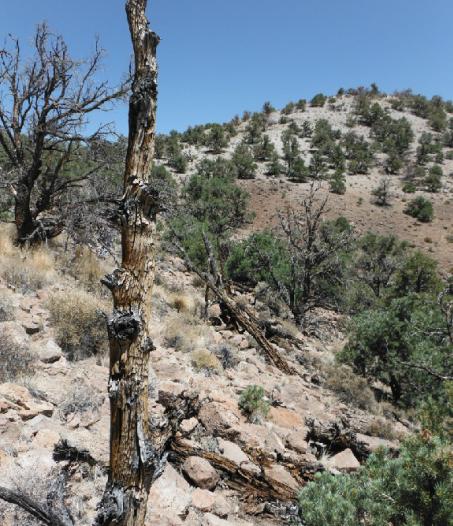 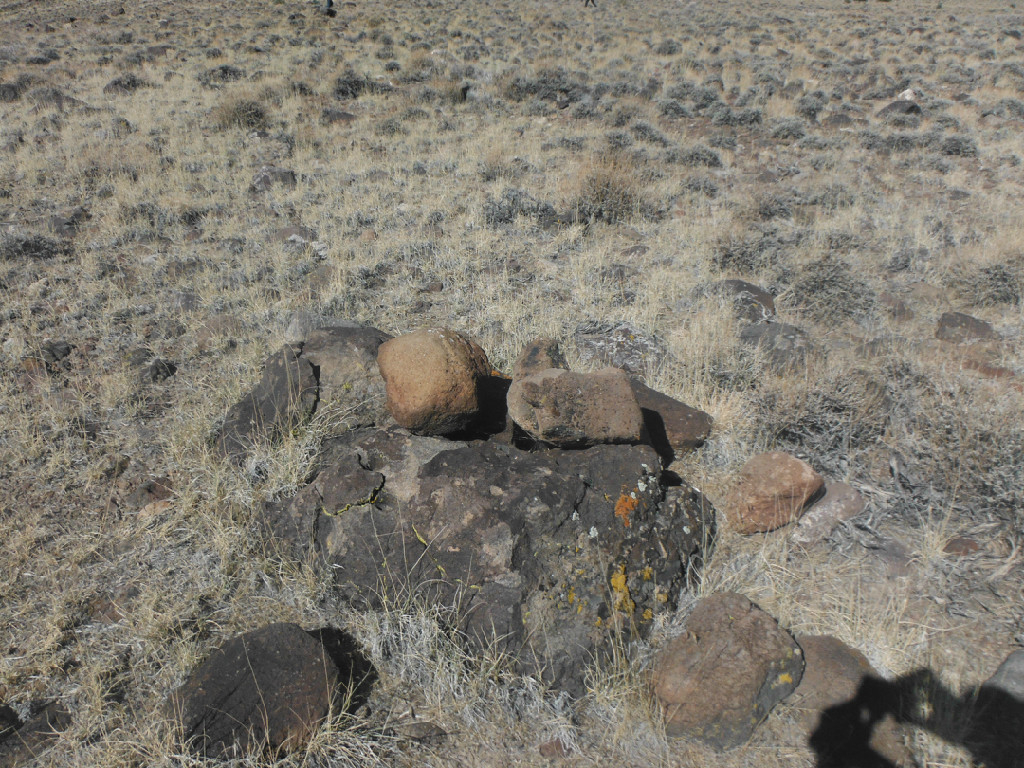 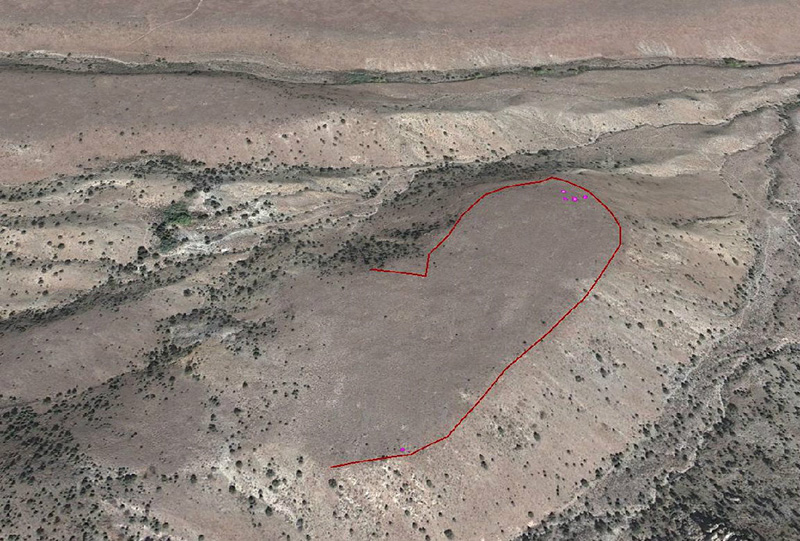 It is not always possible for us to definitely interpret whether a large-scale trap was used for deer or mountain sheep. The images below show what we believe to be the remains of an ancient mountain sheep trap, one we call Blind Point #1. Mountain sheep traps and fences appear to be primarily constructed of rock anchors situated atop larger rocks and bedrock. These rock anchors would have held tree limbs. The anchors are often, but not always, spaced further apart than corrals such as Wichman. In situations like Blind Point #1, we think the hunters probably strung nets between the anchored tree limbs to finish the trap structure. Sometimes these types of structures form corrals as at Blind Point #1; other times they are simply lines or drive fences where animals were ambushed as they walked or ran along the netted fence.

Figure 5. Once all of the rock anchors are plotted onto a map or aerial photo, the configuration of the Blind Point #1 trap is illuminated. The pink dots are locations of catastrophically broken dart or spear points (and one Rose Spring arrow point) located during our survey of the structure. This trap probably captured migrating mountain sheep.